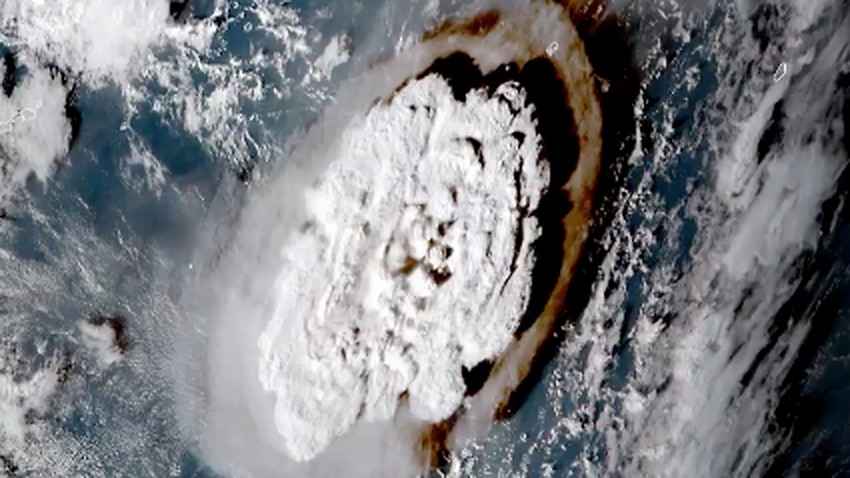 A spokesperson for the Australian government said initial assessments are under way and the Department of Foreign Affairs is working to ensure Australians in Tonga are safe and accounted for.

Thoughts are with the people of #Tonga tonight in the aftermath of the volcanic eruption & tsunami. 🇦🇺 stands ready to provide support to our Pacific family. Australians concerned about people in Tonga should contact @DFAT on 1300555135 or +61262613305. @fekita_u @AustHCTonga

“Tonga is part of our Pacific family and our thoughts are with the entire community dealing with the impact of the volcanic eruption and tsunami,” the spokesperson said in a statement.

“The Prime Minister and Minister for Foreign Affairs are monitoring the situation and Australia stands ready to provide support to Tonga if requested.”

New Zealand’s military said it was monitoring the situation and remained on standby, ready to assist if asked.

Satellite images showed a huge eruption. The Tonga Meteorological Services said a tsunami warning was in effect for all of Tonga, and data from the Pacific Tsunami Warning Centre showed waves of 80cm had been detected.

Tonga’s Hunga Tonga volcano just had one of the most violent volcano eruptions ever captured on satellite. pic.twitter.com/M2D2j52gNn

Authorities in nearby Fiji and Samoa also issued warnings, telling people to avoid the shoreline due to strong currents and dangerous waves.

The Japan Meteorological Agency said there may be a slight swelling of the water along the Japanese coasts, but it is not expected to cause any damage.

The Islands Business news site reported that a convoy of police and military troops evacuated Tonga’s King Tupou VI from his palace near the shore. He was among the many residents who headed for higher ground.

The explosion of the Hunga Tonga-Hunga Ha’apai volcano was the latest in a series of spectacular eruptions.

The site said satellite images showed a five kilometre-wide plume of ash, steam and gas rising up into the air to about 20 kilometres.

The volcano is located about 64 kilometres north of the capital, Nuku’alofa.

Back in late 2014 and early 2015, a series of eruptions in the area created a small new island and disrupted international air travel to the Pacific archipelago for several days.