Hundreds Gather in Dublin to Mourn Woman Killed While Running 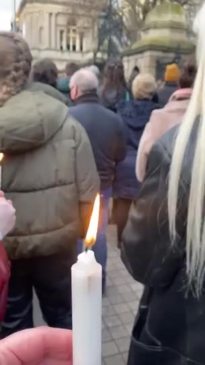 Large crowds gathered outside government buildings in Dublin, Ireland, on Friday, January 14, for a young woman who was killed while out exercising earlier in the week. Ashling Murphy, a 23-year-old school teacher, was running along a popular canal-side route in Tullamore, County Offaly, on Wednesday, January 12, when she was attacked and killed, Irish media reported. The attack happened at around 4 pm, according to police. Footage filmed by Twitter user @AnTaobhRua on Friday shows people observing a moment of silence during a vigil outside Leinster House, the seat of Ireland’s parliament. Other vigils were scheduled across the country in the following days. Credit: @AnTaobhRua via Storyful